Rakishev played in the "unknown"

rucriminal.info continues a series of articles about the American testimony of Kazakh oligarch Kenes Rakishev. They were voiced by Rakishev in the US court, where the lawsuit of BTA Bank was examined against the former owner of the bank Mukhtar Ablyazov, the former head of the capital of Kazakhstan Viktor Khrapunov and his son Ilyas Khrapunov. The lawyers of the latter tried to prove at the trial that Rakishev was only the nominal owner of BTA Bank. In reality, the bank is controlled by people from the "top" of Kazakhstan and these people are behind the persecution of Ablyazovan and Khrapunovs. The names of these people from the "top", with whom Rakishev personally communicates, were voiced. Kenes himself the fact of close communication directly with them or their representatives. This is the head of the KNB Karim Masimov, the son-in-law of the head of Kazakhstan Timur Kulibayev and personally Nursultan Nazarbayev. All these names are in the records of the interrogation of Rakishev, a certified copy of which was at the disposal of rucriminal.info. Such suspicions, according to rucriminal.info, were fully confirmed at the hearings. Asked about the specific activities of the BTA Bank in which Rakishev was the chairman of the board of directors at the time of the interrogation, he answered: "I do not know", "I was not reported", "Ask the bank's lawyers", etc. Moreover, to the question of what he thinks about the economy of one of the firms, the fate of which was negotiated the day before, Rakishev, he honestly admitted: "I do not understand and do not think anything." 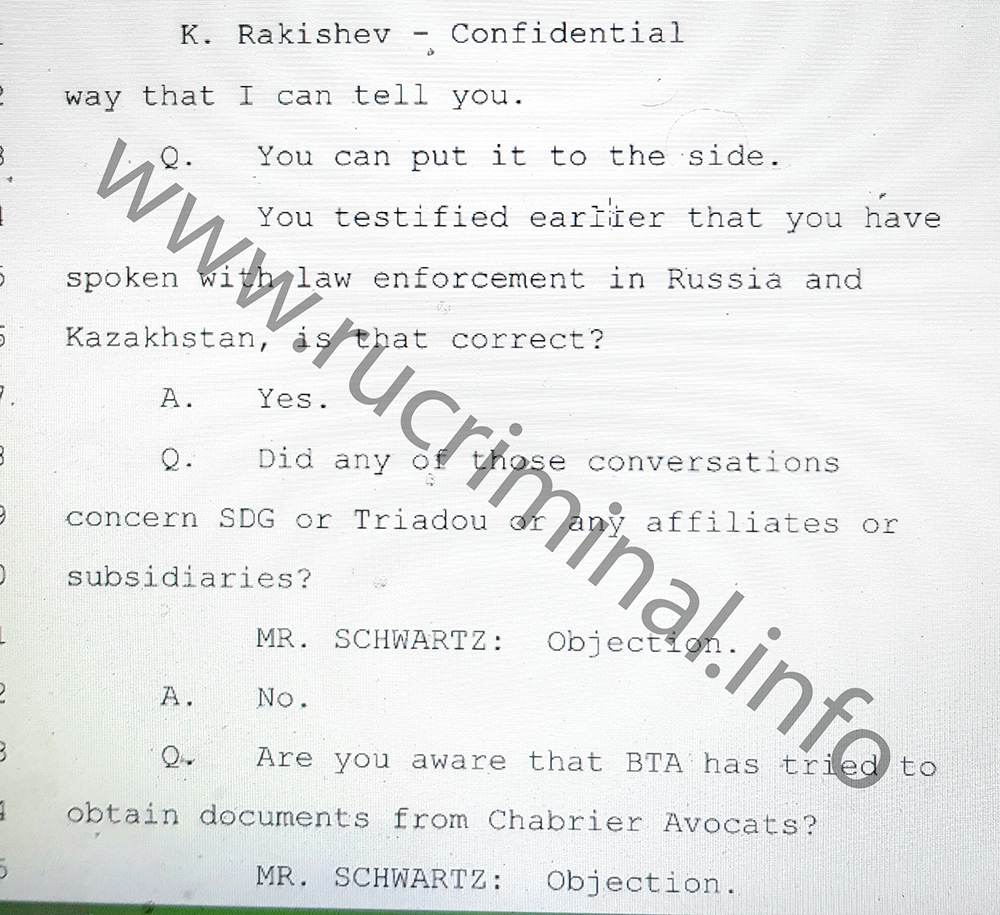 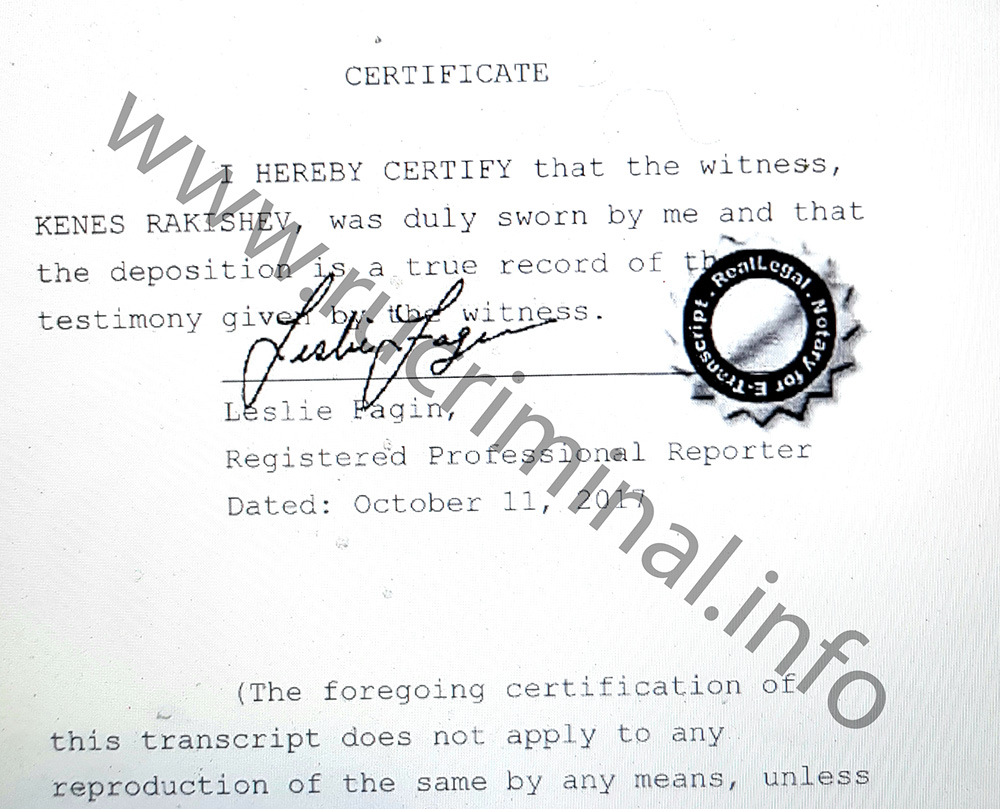 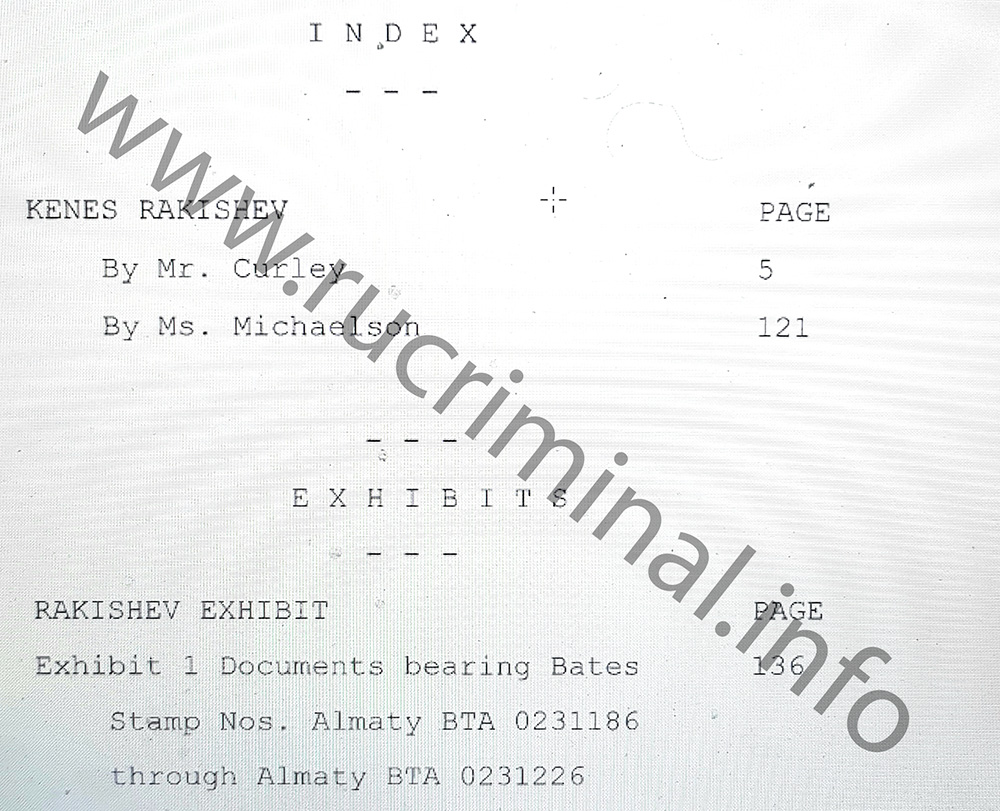 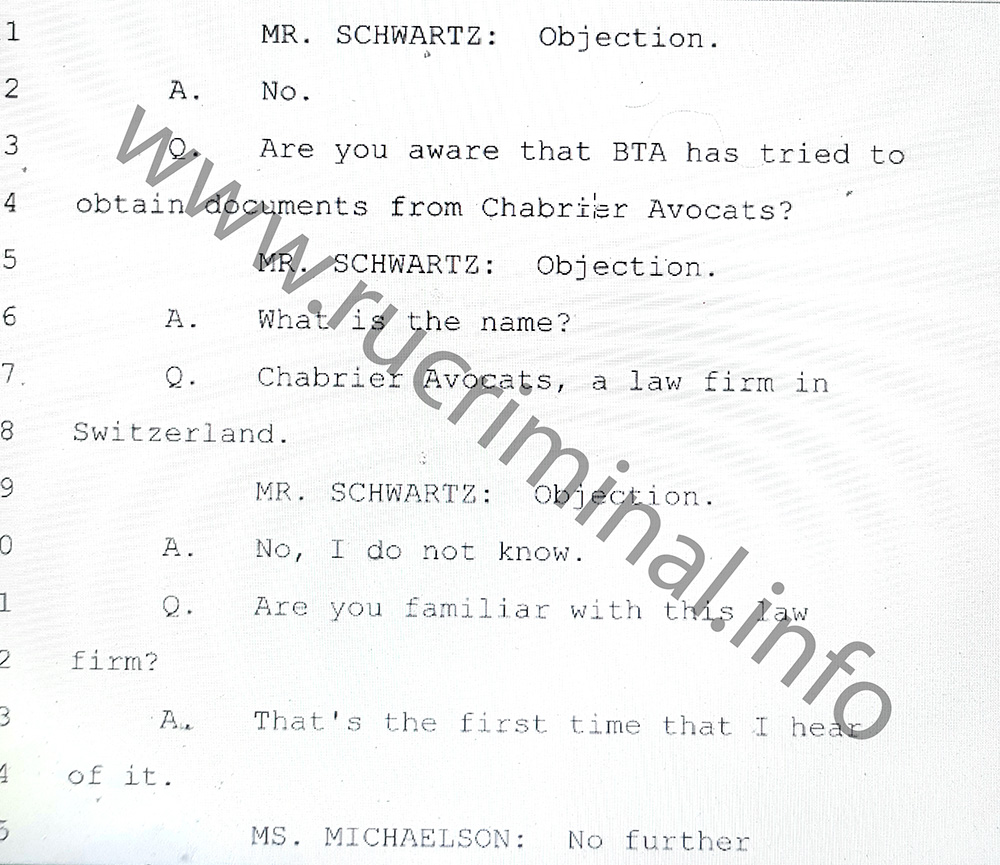 Q. Do you know that BTA reached an agreement with Eesh Aggarwal?

Q. Do you know that BTA entered into an arrangement with a man named Felix Sater?

Q. Do you know that BTA entered into an arrangement with Daniel Ridloff or Kevin Mayer?

Q. Do you know a person named Philipe Glatz?

Q. Do you know anything about how Mr. Glatz wanted to purchase SDG?

Q. Do you know that BTA and Almaty have transferred cases against Joseph Chetrit and the companies that he owns?

Q. Do you know that BTA and Almaty have resolved the issue with claims to Chetrit?

R. I do not know any details.

Q. Do you remember the discussion of a settlement agreement with Chetrits with Nulan Nurgabylov?

R. In general, Mr. Nurgabylov does not report progress to the Board of Directors with claims.

Q. But do you remember the specific conversation with Mr. Nurgabylov regarding the settlement with Chetrit?

Q. Have you ever spoken with Joseph Chetrit?

Q. How many times?

R. Yesterday, this was the first time, and it was yesterday.

Q. What's the conversation about?

Q. What is your understanding of Flatotel economics?

R. I still do not understand it in full.

Q. What do you understand about Flatotel economics?

R. I do not understand.

Q. What is Mr. Chetrit saying?

R. There are no specifics.

Question: So what did Mr. Chetrit say?

R. We actually agreed that our lawyers should start communicating with each other.

R. I think it's better to tu to lawyers. They must answer this question.

Videographer: We have 5 minutes left on the DVD.

Videographer: We tued off the recording. The time is 4:15 pm

Question: Mr. Rakishev Annex 3 is an amicable agreement between Almaty and BTOM and also by Joseph Chetrit. Have you ever seen this document before?

R. Only yesterday during the preparation for this hearing. My lawyers showed it to me.

R. I do not know. I do not know any details of this agreement. I saw him yesterday for the first time, so I can not tell you anything.

Q. You can put it aside. You testified earlier that you had a conversation with representatives of law enforcement agencies in Russia and Kazakhstan, is this correct?

Question: Did SDG or Triadou, any of their affiliates or affiliated companies, rise during these conversations?

Q. You know that BTA was trying to receive Shabriye Avocats documents?

R. What did you say the name?

Q. Are you familiar with this firm?

MISTER. SCHWARTZ: Anything else? Nothing.

Videographer: We tued off the recording. Time 4:25 pm This ends today's deposition.

I confirm that witness Rakishev was swo in by me.